The One Gastric Bypass Anastomosis (OAGB), also known as “mini gastric bypass” was first performed in 2001. The OAGB is a minimally invasive procedure performed with laparoscopic technique. During an OAGB procedure, the surgeon first reduces the size of the "functional" stomach by separating a tube-shaped stomach pouch from the rest of the stomach. This tubular gastric pouch connects (anastomoses) to the intestine, bypassing up to 200 cm of the upper part of the intestine. This technique differs from the traditional Roux-en-Y bypass (RYGB) which requires two connections (anastomosis).

An OAGB generally results in a loss of body weight from 30% to 40% from the beginning (loss of excess weight from 60-80%). The fastest weight loss occurs in the first 6 months after surgery and then continues at a slower rate for another 18 months. This weight loss is achieved through both restrictions (the new gastric pouch may hold only a small amount of food) and malabsorption Bypassing a considerable segment of the intestine, the remaining intestine is not long enough for normal absorption of nutrients, leading to malabsorption. Substantial weight loss can lead to dramatic improvement and even complete remission of many of the obesity-related comorbidities. Long-term data show that OAGB can lead to slightly greater weight loss and better resolution of diabetes than RYGB. The higher diabetes remission rate in OAGB could be attributed to both the greater weight loss and the longer derived limb. 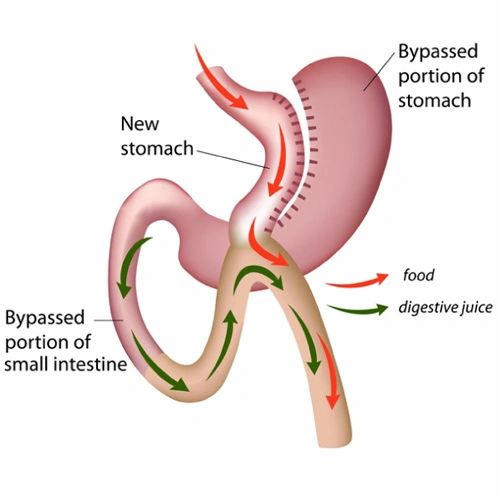