Gastrointestinal surgery provides the most substantial and sustainable weight loss in obese individuals. The procedures are collectively called bariatric (from the Greek words baros [weight] and iatrikos [medicine]) or metabolic (when cardiometabolic risk reduction surgery is the intention) and are among the most common gastrointestinal procedures.

Metabolic syndrome is a group of disorders that occur at the same time and increase the risk of heart disease, stroke, and type 2 diabetes. These disorders include increased blood pressure, high blood sugar levels, excess body fat around waist and abnormal levels of cholesterol or triglycerides.

Bariatric surgical procedures cause weight loss by restricting the amount of food the stomach can hold, causing nutrient malabsorption, or by a combination of gastric restriction and malabsorption.

The goal of obesity treatment is to achieve and maintain a healthy weight. This improves overall health and reduces the risk of developing obesity-related complications.
Initially, the ideal is a modest weight loss: between 5 % and 10 % of your total weight. This means that if you weigh 200 pounds (91 kg) and are obese by BMI standards, you would only need to lose about 10 to 20 pounds (4.5 to 9 kg) for your health to start improving. However, the more weight you lose, the greater the benefits.

All weight loss programs require changes in your eating habits and an increase in physical activity. The treatment methods that are right for you depend on the severity of your obesity, your general health, and your willingness to participate in the weight loss plan.

Vagus nerve block is another treatment for obesity. It consists of implanting a device under the skin of the abdomen that sends intermittent electrical impulses to the abdominal vagus nerve, which signals to the brain when the stomach feels empty or full. This new technology was approved by the FDA in 2014 for use in adults who have not been able to lose weight with a weight loss program and who have a BMI between 35 and 45 and at least one obesity-related condition, such as type diabetes two.

Bariatric / metabolic surgery is the most effective and long-lasting treatment for severe obesity, resulting in significant weight loss and leading to improvement, prevention or resolution of many related diseases, including type 2 diabetes, heart disease, hypertension, sleep apnea and certain types of cancer (3) (4).

Indications for surgery for obesity and weight-related diseases: position statements from the International Federation for the Surgery of Obesity and Metabolic Disorders (IFSO) and the American Society for Bariatric and Metabolic Surgery:

The benefits of the surgeries depend on the techniques that are performed, but in general, success in losing weight is between 68 and 85% (significant difference when compared with non-surgical treatment), resolution or improvement of diabetes in the 85%, in hypertension in 70%, dyslipidemia 85%, fatty liver 90%, sleep apnea 95%. This increases life expectancy by 8 years for men and 12 years for women.

When observing the metabolic benefits that surgery generated, in 2003 in Rome, a consensus was made that brought together diabetologists, cardiologists, clinical doctors and surgeons where bariatric surgeries were proposed to treat these metabolic diseases without having to be a morbidly obese person, emerging thus the name of metabolic surgery. 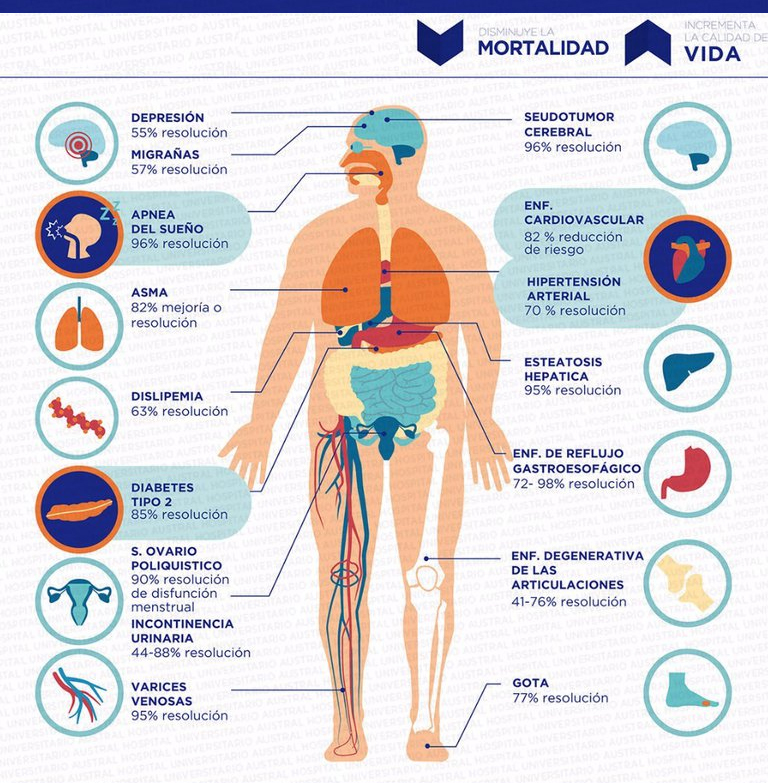 Studies show that bariatric surgery can reduce a patient's risk of premature death by 30-50% (5) (6).
Patients generally lose more weight one to two years after bariatric surgery and maintain substantial weight loss with improvements in obesity-related conditions (7) (8).
Patients can lose up to 60% of excess weight six months after surgery, and 77% of excess weight as early as 12 months after surgery (9).
Most bariatric surgery patients with diabetes, hyperlipidemia, hypertension, and obstructive sleep apnea experience resolution or complete improvement (JAMA, 2004) (10)