This type of biliopancreatic diversion changes the size of your stomach and the length of your small intestine. The goal is to limit the amount of food you can eat and absorb at one time. In this type of procedure, a part of the stomach is closed with staples to create a smaller cavity. The rest of the stomach is removed. Reducing the size of the stomach restricts the amount of food you can eat at one time. The small intestine is then divided, and only a very short section of its lower part is reconnected to the stomach. By not using part (or most) of the small intestine, less food is absorbed.
Only a very short section of intestine is left capable of absorbing food. Consequently, most of the food is disposed of as excrement rather than absorbed as energy. 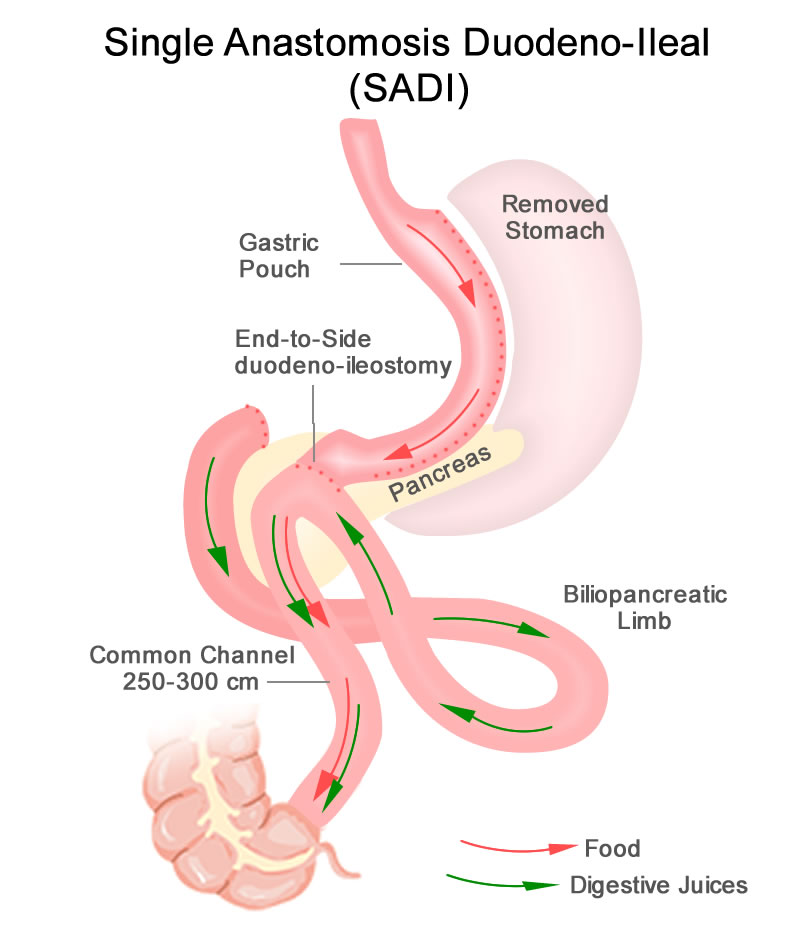 The SADIS technique is a technique that combines three utilities: treatment of superobesity, treatment of type two diabetes, and revision of failure of the Gastric Tube or Gastric Sleeve.

Its name in acronym SADI-S (Single doudeno-ileal anastomosis with sleeve gastrectomy) or translated, “Bypass Doudeno-Ileal, with Tubular Gastrectomy”, actually describes how this technique is performed

SADI-S has been used as a conversion procedure for inappropriate weight loss after RYGB. SADI-S has also been recommended for patients with insufficient weight regain or weight loss after SG and there is a growing body of literature on the need for SG revisions and conversions. Some advocated for SADI-s after a suboptimal OS result that produced better and more reliable weight loss than other procedures, such as RYGB

The SADI-S procedure is fundamentally a variant of the DS operation, in which the transected duodenum is anastomosed to an ileal loop as opposed to the classic DS in which a Roux-en-Y configuration is used. The SADI-S procedure was developed in part to reduce the complexity and thus the risks of performing a Roux-en-Y configuration with small diameter distal bowel and the need for 2 anastomoses.

The ASMBS supports the classic DS procedure (BPD-DS) and is among the procedures that society believes meet the appropriate standards of safety and benefit. Therefore, the SADI-S procedure, as a variant of the classic DS, deserves consideration for the endorsement of ASMBS as a modification of an already approved metabolic / bariatric procedure.